Camp Living Springs in Ellenton, Florida – My Weekend in Review 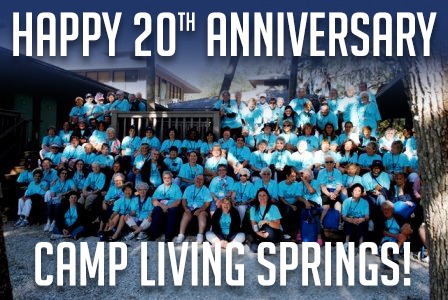 I attended camp last week! No, not a camp for little kids dropped off by frazzled moms who just want a breather. Instead, a camp of refreshment and fun for adult cancer survivors at Camp Living Springs in Ellenton, Florida. Spread out over 100 acres of beautiful, rustic, wooded property, the camp lies next to the Manatee River.

If you’ve experienced cancer, or currently going through treatment and are ambulatory, you’re eligible to attend. The mission of the camp is to promote camaraderie, relaxation, and shared experiences while nurturing the spirit of those touched by cancer.

The short weekend took an entire year of planning, and being their 20th anniversary, it was quite a celebration! This weekend was provided at no cost by a grant from Morton Plant Mease Health Care Foundation and the YMCA of the suncoast.

Five members of my YMCA Livestrong group traveled together: Carol, Mary, Phyllis, Lorraine, and me. Unfortunately, there were four who could not attend: Betty, Andrea, Angela, and Penny, and they were sorely missed. If you missed my review on the Livestrong program, catch up on that here.

We started out in the wee early morning hours on Friday, to arrive at Morton Plant Hospital in Clearwater at 8:30 a.m. We traveled for two hours on the first leg, then once we reached the hospital, we rode another hour by luxury coach the rest of the way.

Let me say I’m NOT a morning person, so rising at 5:00 a.m. is a stretch for me. I had to be at Carol’s house by six, then off to pick up two more at Racetrace, and another on the side of the road. I was a zombie all the way to Clearwater until I ate my yogurt, granola, and cherries. After that, I joined the land of the living.

After arriving at the hospital, we checked in and received our first of many gifts. A very chic pair of aqua, UV protection sunglasses with “Camp Living Springs,” printed on the stem. We also received a lanyard with our name and bus number. Tiny muffins and coffee was available, then we split up and boarded our assigned bus. Noreen was my seatmate, and a friend from my own home town!

After an awe-inspiring trip over the Skyway Bridge with ocean views on both sides, the bus wheeled into the campgrounds and we hit the ground running. First, they gave instructions to find our dorm or a cabin—air-conditioned, of course. I was assigned a dorm called “Luke Right.” There was also a left side, and both sides had bunk beds, with us sleeping only on the bottom.

The Day Had Just Begun

Both sides of the Luke dorm had a little icebreaker after we chose our bunks and dropped off our things. Another surprise awaited of a blue bag of goodies packed with a journal, colored pencils, flashlight, and t-shirt.

During the icebreaker we used toilet paper, and were told to take as many pieces as we wanted. Not knowing the reason, some got stuck with long pieces, and the more you tore off, the more you had to share. Playing it safe, I pulled off four small squares so I didn’t have to rattle on too long. Lucky for the ones listening!

Soon, we ate lunch, followed by opening ceremonies. We had wonderful speakers and played fun games using skittles, which some people ate before the games. This fun time together broke down barriers as we laughed and got to know one another. We also started on the first of many crafts by painting Sand Dollars (one of my favorite shells) with vibrant and glittery paints.

The speaker encouraged us not to overthink, but instead pick a color that speaks to us. Of course, my shell ended up pink, and by the time I’d finished creating, I’d used about 10 colors on that one shell. Being creative was fun and relaxing. The staff showered us again with gifts before leaving—a drinking glass with lid and straw emblazoned with “Camp Living Springs – 20th Anniversary 2018,” and a fuzzy, warm sweatshirt with the same.

Next, we could head to teatime, but I was so weary I instead chose to nap a bit before dinner. They weren’t kidding when they described camp as a “cruise that never leaves the dock.” We were constantly eating—a big change from two small meals per day.

Late Friday afternoon, there was more…much more to come. The haunted Polynesian cruise was held that evening, and we were encouraged to dress up in our favorite Halloween outfit. One of my Livestrong sisters had suggested sailor outfits, which had a little white hat and collar. We drew anchor tats on our arms with (thankfully) washable markers. Such a simple outfit—but we were the hit of the party! Another plus was we weren’t out much money.

Another surprise guest was Elvis Presley. He was alive, doused with cologne, and waiting in the lobby to greet us, flirt, and pose for pictures. Decked out in his finest, form-fitted sequinned suit, he sang his greatest hits throughout the evening as we danced, played bingo and trivia, and ate some more.

Afterwards, we sang along and munched on s’mores around the campfire with Bill and Tracy from our YMCA. They encouraged us to shed our inhibitions and come on up to the mic to sing Moody Blues, Eagles, Led Zepplin—and more. We swatted off blood-sucking mosquitoes, and finally headed off for bed.

Saturday was jam-packed—from morning to night. After breakfast, we could choose from yoga, tai chi, strength and cardio, canoeing, or arts and crafts—all before lunch. Then, we had our choice again of arts and crafts, zumba, canoeing, or relaxation and deep breathing—which I chose. Then, instead of making my own sugar scrub, I headed back to the room for a quick nap—preparing for the Roaring 20’s Party later in the evening.

Later that night, my head was decked out with a glittery, black headband with black, white and pink sequined feathers—another craft creation from earlier in the day. We were dazzled by several of the sparkling, fringed dresses and tuxes during the costume contest.

By Sunday, everyone was dragging and ready to head home, but there was still more before we could leave. First, we created a wreath using carnations from each camper, for the ceremony after breakfast. There was a moment of silence as the wreath was released to gently float across the pond. The speaker moved me to tears as he gave a moving tribute honoring campers from previous years no longer with us on this earth. As he spoke, the sun peeked through the trees, and a gentle breeze touched our faces. They were definitely with us in spirit.

Finally, all the campers squeezed into a tight space, practically sitting on top of each other to get a final group picture. We then participated in a rousing drum circle and closing ceremony.

The weekend was an amazing time of fun and fellowship with fellow cancer survivors. This is truly a retreat where you can forget about sickness and treatments and focus on health and friendships. It was a time I will never forget. If you live in Florida, go here to volunteer or apply.

What are your memories of camp? I’d love to hear from you!