“Way down upon the Suwannee River…..”

Those lyrics are from the Florida state song, “Old Folks at Home,” written by Stephen Foster in 1851. You can listen to the song performed by Pete Seeger as part of his historical “American Favorite Ballads”. Sit back, close your eyes, and ease into the laid back mood of an earlier time in Florida history:

Where is the Suwannee?

The Suwannee River, rising from the Okeefenokee Swamp in southeastern Georgia, curls through north Florida woodlands, spilling its spring-cooled waters into the Gulf of Mexico in Florida. It topographically slices the Florida panhandle from the rest of the state.

My husband and I had an opportunity to take off for a couple of very restful days. Our getaway consisted of a room at the “Suwannee River Rendezvous”, with a balcony directly on the Suwannee River. Disneyworld, Florida this is not. This remotely tucked away resort is located in Mayo, Florida, in “dry” Lafayette County. Even the GPS could not find it. If you want a getaway to rest, relax and listen to millions of croaking green frogs, this is the place for you.

The river is also famous for its “jumping” Gulf Sturgeon. These prehistoric, steel-plated fish can reach six feet in length! I was a bit nervous thinking about these jumping armored tanks as we had a canoe rental for a day, and I wasn’t crazy about getting whacked by a fish. We spotted a few off and on while standing on our balcony, but they always seemed to hurl themselves into the air once we walked back into the room, and then all we heard was a giant “kerplunk”!

A Ladder to a Loft

Our canoe trip adventure was set for the next day, and the 4G service on the Android was not allowing us to access the internet from the room, so the only thing left to do was eat the last of our shredded chicken salsa wraps, munch on a blueberry muffin, and watch one of the few cable channels on TV. Then it was time to hit the sack in the loft room, which was accessible only by a ladder with “rungs” about 2” wide. Now if you are a four year old, this would be such fun! But at our ages (let’s just say 40 something), not so much. All I could think about was having to go to the bathroom, and climbing up and down the ladder in the middle of the night. Let’s just say I curtailed my water drinking.

Food in the Wild

With visions of Grandma Susie’s cooking shack and homemade biscuits and gravy dancing in our heads, we drifted off to sleep. Knowing we were safely tucked away in our river room—only a few feet away from all the cottonmouth snakes, alligators, and other wild creatures roaming, slithering or swimming outside—gave me an eerie sense of calm.

The morning dawned steel gray and rainy, so we treaded lightly on the rocks behind our room and through the muddy little gully to head on over to breakfast. The weathered lodge houses the office, as well as a little den to one side with a worn leather couch, big screen TV, and bookshelves stocked with puzzles and books. The other side houses a small dining area with a few booths and tables overlooking “Convict Springs”.

Charlie, the resident Labrador retriever, wandered among the breakfast tables hoping to pick up a scrap or two, and then ambled back to his usual position on the sofa.

Springs with a Shady Past

The attractive moniker of “Convict Springs” sprung from being used as a remote camp by the Lafayette County jail system in the 1900’s. Prisoners who were a part of the chain gang, worked on the roads and would camp here at night. All the prisoners have disappeared into the recesses of history, but the springs still stands.

Gazing out the window of the lodge, the 21st century Convict Springs sits pretty and serene, without so much as a hint to its lurid history. It’s fed from an underground cave system, which in turn is fed from the Florida aquifer. The Convict Spring cave has very narrow passages and is only accessible using a side mount dive method. Only very skilled and experienced divers are able to gain access to the cave system.

Convict Springs has beautiful clear water that makes for great swimming, but I did not desire to dip in my toes. The spring water flows at a constant 70.5 degrees all year long. Usually clear and pristine, a couple of rowdy boys performed cannonballs, stirring up mud and sticks and leaving it murky.

We hungrily ingested a hearty breakfast consisting of several cups of steaming creamed coffee, over easy eggs, toast, grits and some very crisp bacon. Then it was time for some rest and relaxation time on the computer, checking out some ebay auctions, answering e-mails, and watching the weather reports. This way, we could avoid being trapped in the middle of the mighty Suwannee in a ferocious Florida summer thunderstorm—complete with Florida lightening.

Once satisfied we were seeing a break in severe weather action, we were ready for our adventure and set out for our canoe trip upstream. Several hours of paddling would leave us extremely tired and sore, so we planned for the current to carry us along on a return downstream trip.

It was now time to brave Mother Nature with a small boat, two paddles, two life vests, bottled water, and some blueberry muffins. We put the camera inside of a sealed plastic bag—just in case it fell into the water.

Peace and Quiet Until….

The slow trip and the hazy weather started out smoothly enough. We enjoyed the calm and peace of the large river, along with scenery of centuries old cypress trees and protruding knuckles poking up from underwater. Turtles lazed quietly on stumps or on little islands of grass. Paddling was no trouble—me the steerer, and hubby the propeller, except when we arrived at some small rapids the owner had neglected to warn us about. The current kept pulling us toward the shore. We paddled furiously until our arms felt numb, and we eventually made headway out of the current. Grandma Susie told us about a couple different natural springs we could access right from the river, although we could not locate them. We were instructed to search for a blue sign, then hike up a small hill, where we had access to our own private spring. Somehow, we missed all the landmarks. 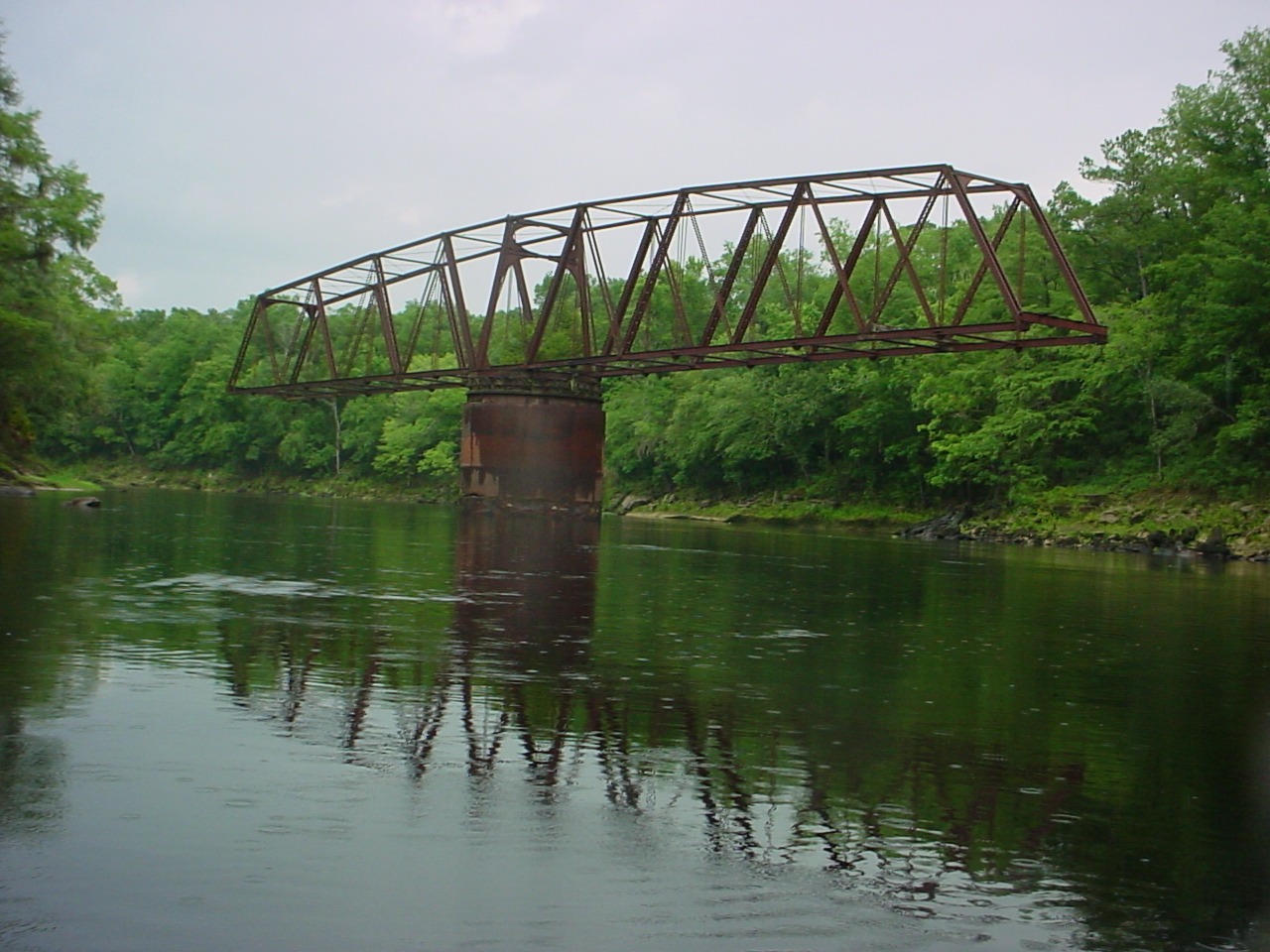 Instead, we set our sights on making it to the old Drew Bridge. The bridge was purchased in Brazil for $15,000 in 1899 and was floated on a barge to its present location. It was manually operated by two men turning a crank in the middle of the bridge to allow the Florida Railroad to cross the river. Deactivated in 1920, it still stands in its present location to this day.

Once we steered and floated up to the bridge, it was interesting to see that the base, which had rusted out somewhat, was filled with rocks. The river was so peaceful and quiet, except for the occasional squawking bird or the jumping sturgeon, I could almost hear the train’s chug chug chug and the mournful old whistle announcing its arrival.

Then the rains came. A little sprinkle at first–then buckets. Sitting in the middle of this tiny canoe, directly in the middle of the river, we were far from shore. Being pelted with freezing rain with no cover over my head and scary fish beneath our boat was not my idea of a fun vacation. The only choice was paddle furiously for shore as quickly as our arms would take us, and the canoe was fast filling up with water, in sore need of a dump out.

I was scared. Needless to say, I’m not much of an outdoors woman. Cold rain pelted our faces and arms, sometimes signaling tornadoes. I also started picturing us tipping over in the middle of this huge, murky, swampy river and being lost forever. Amongst gators, snakes, and jumping sturgeon. We’d be sucked down in the murky blackness, down to the silt and sand. No one would know we were there.

At this point, my fears were overwhelming me and I was mentally writing my obituary. However, just when I thought all was lost, the rain let up slightly, we dumped the canoe, and then headed back downstream–waterlogged and exhausted–for the refuge of our dry room and hot shower. Needless to say, we both slept like babies that night. Grateful for a room up a ladder, in a loft, in the midst of the deep Suwannee wilderness.

And I didn’t even mind the ladder.

NOTE: This trip was taken several years ago, but too good not to share.

Have you traveled to exciting destinations? Tell us about it!

I’d love to hear from you!

Penelope Silvers is founder of PhilosBooks.com,
where Independent Authors are introduced to the World!
She is a freelance writer, publisher, and radio host of
Penelope’s Book Chat on Blog Talk Radio