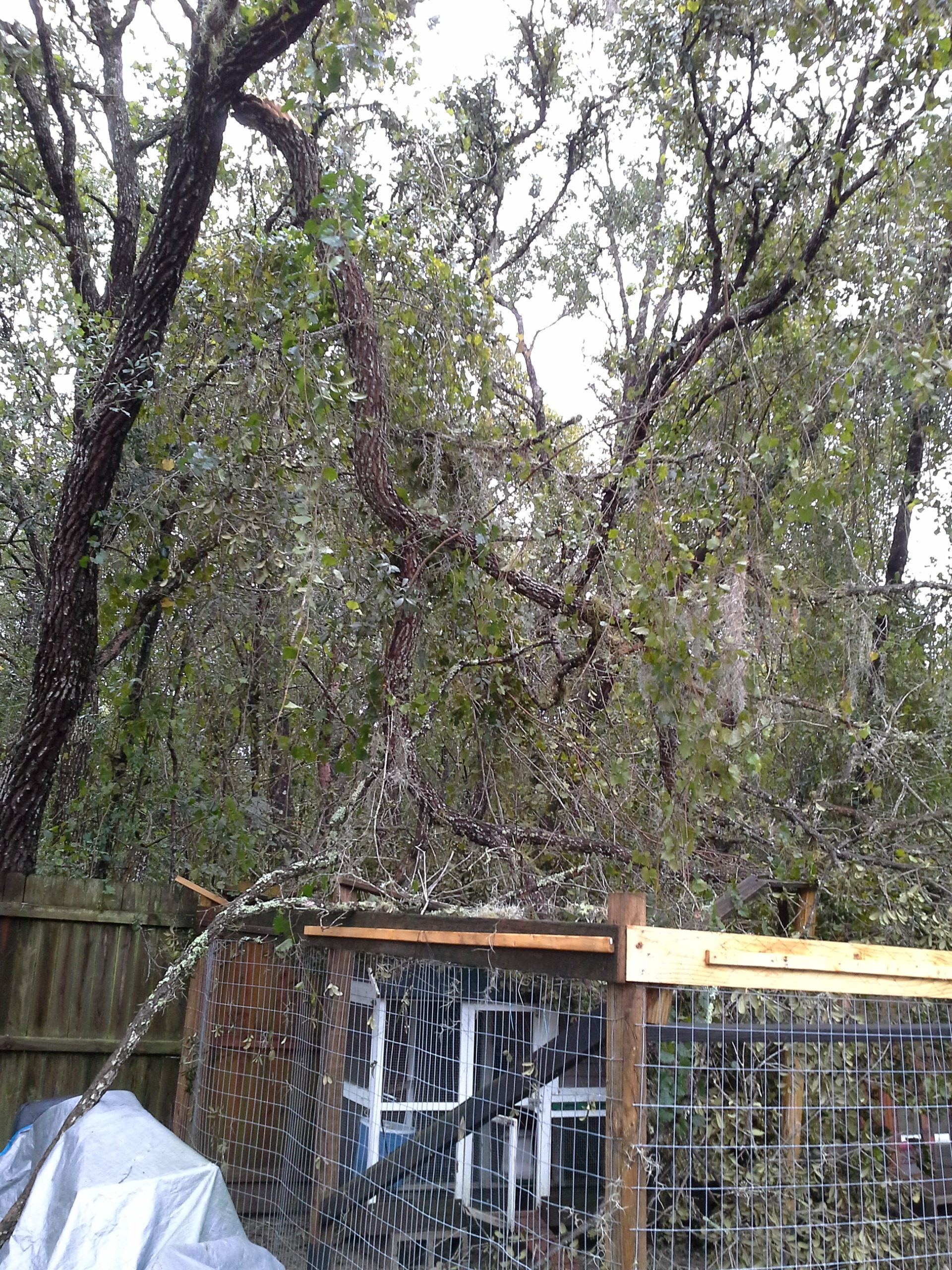 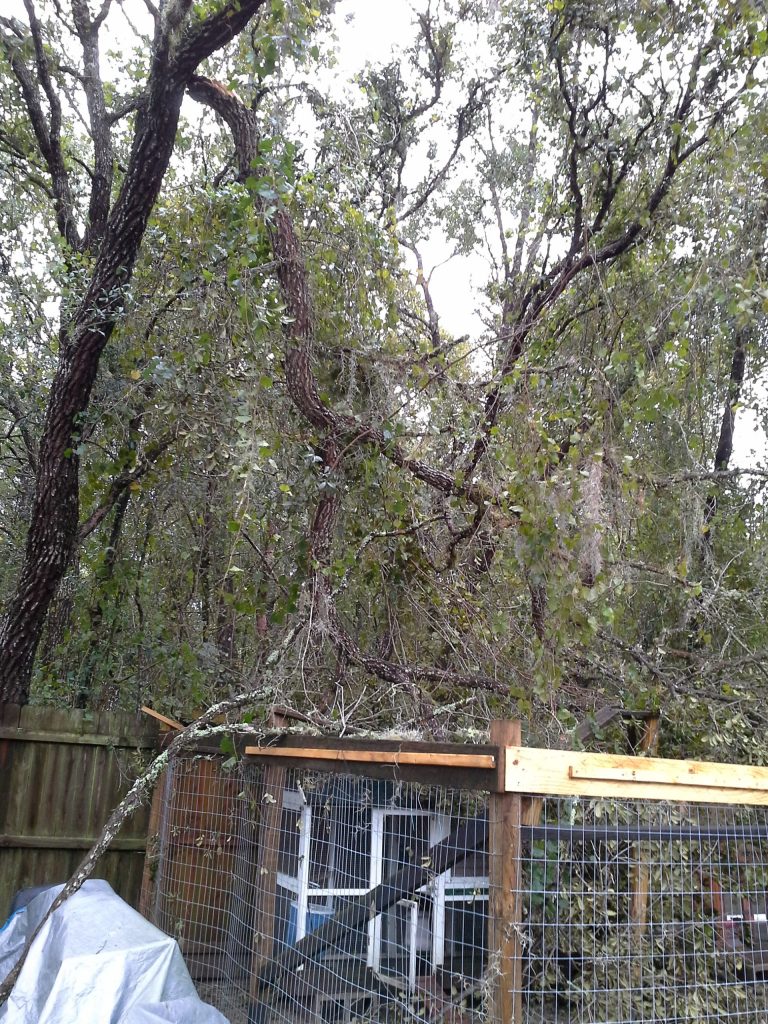 Timber! Right Inside the Chicken Coop

If you missed Part 1, you can read it here.

5.6 million—around a quarter of Florida’s population—have been ordered to evacuate. Many joined the mass exodus. We decided to stay put. Read more here.

I woke Sunday morning to these words blaring from the radio: Psalms 46:1. “God is our refuge and strength, an ever-present help in trouble…” This is not unusual except this was the exact verse I prayed during the night as I tried to sleep. Now these same words touched my soul—read by another. What a comforting message from my God. We were going to be okay.

Rains dumped on us most of Sunday, and became heavier into the evening. Lights flickered on and off after dark. Ron showered and I did some last minute computer work.

9:00 p.m. One last flicker. Lights went dead. We wait for Irma in the glow of oil lamps. Only a matter of time.

I prayed, “Lord, help us. Please move this thing away from us. Spare us.”

The winds never died down, but my anxiety did.

The Guardian reported on the status of Irma as she continued to move into the north of the state, but was losing strength. Read more here.

Night of the Hurricane

We heard a crash. Ron looked outside but saw nothing in the total blackness. We were now at the mercy of nature, and our fate was out of our hands. I turned on my left side, exposing my deaf ear to shut out the noise, and slept until 6:00 a.m.

Woke to quiet, dripping rain. The storm was over. I slept soundly for a couple more hours. 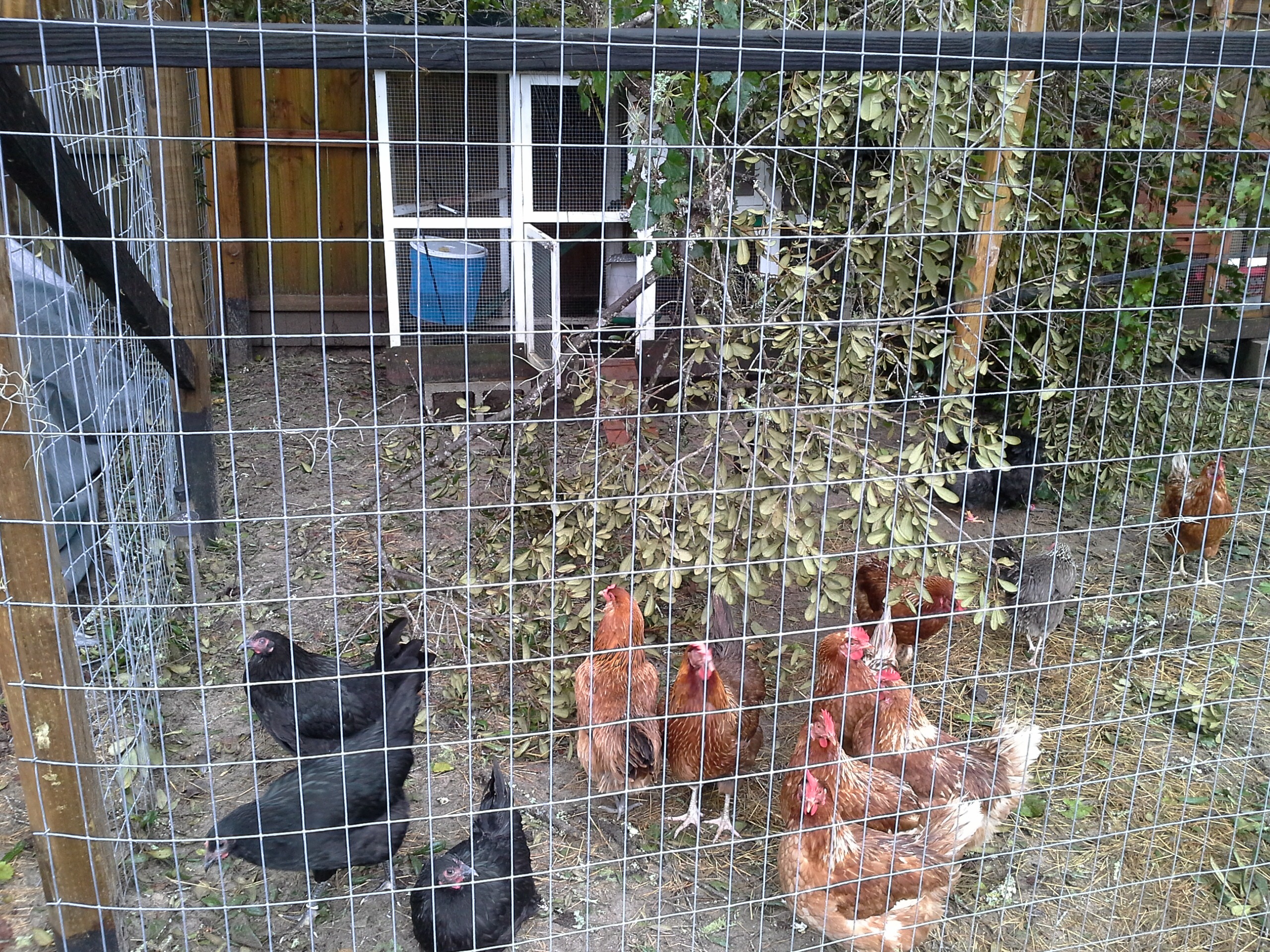 A huge tree limb had cracked and was resting inside the chicken barnyard, precariously held up only by our brand new poultry net covering the top—and a small sliver of bark still attached to the tree. It had snapped one of the boards Ron had nailed on top of the wooden posts to hold the net.

The chickens were enjoying themselves: jumping on and around the twigs, branches, and leaves. It was a new toy (possibly full of bugs), and they were exploring all the ins and outs of this new curiosity. They also dug themselves down in the dirt and lay close together, as if having a hen party. 😉

Later in the day, the weight being too great, the limb broke from the tree, and is now perched half in and half out.

Next, we inspected the fence, blown over by Irma’s huffing and puffing. 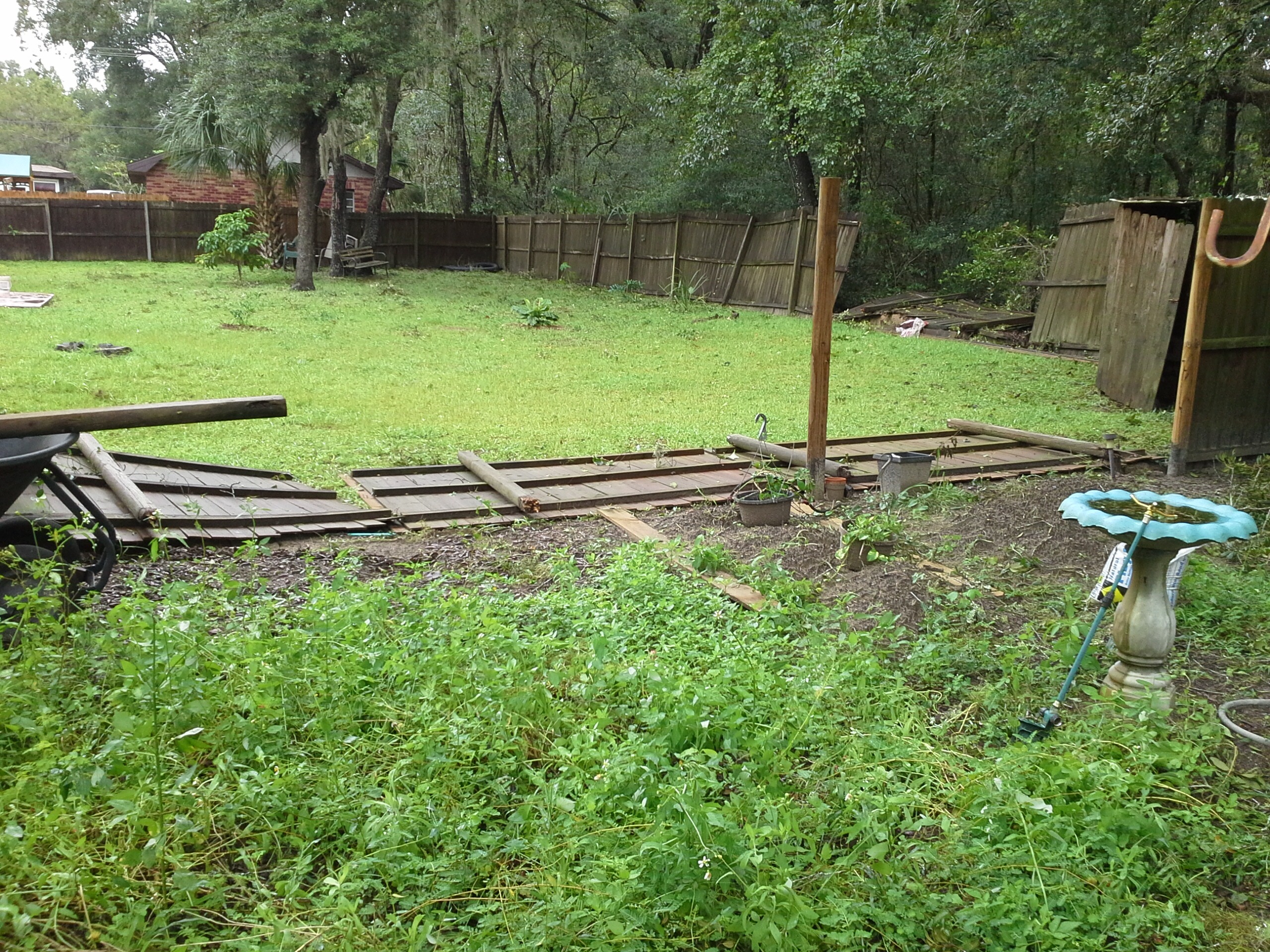 Fence in sore need of repair

Our neighbors weren’t home, so it was up to us to get it fixed ASAP. Fortunately, we still had a few tar-coated posts from the last fence repair. Termites in the south will eat anything smelling remotely like wood—even treated, so this keeps the critters away.

After checking out what needed fixing, we were hungry, First thought? Drive through McDonald’s for a hot cup of coffee and an Egg McMuffin. Of course! We had a full tank of gas and headed that way.

Many leaves and branches covered roads. When we arrived at the main road, we were shocked.

Not only was McD’s closed, but Wendy’s, Lowes, and Walmart! All restaurants, businesses, everything shut down. No movies on the sign, no restaurant specials, nothing. No place to eat or go to the bathroom. It was quiet, calm and eerie like an episode out of the Twilight Zone where we were the last people on earth. Everyone had disappeared.

We drove through Walmart’s empty parking lot, then Lowes, then back on the main thoroughfare, where a few other people were out gawking, just as we were.

One small business had part of their metal roof ripped off, like it’d been peeled from a sardine can, with another piece blown across the road. Another building had shingles torn off its roof.

That wasn’t all. Entire trees toppled over. Some on power lines some blocking roads, some on top of cars and houses. And this was from a storm that had downgraded to 80 MPH from 147. We had dodged quite a bullet.

Exhausted from a stress-filled week and a night of howling winds, we set to work after eating turkey and cheese sandwiches. After all, it was almost 11:00 a.m. and time is of no importance when there are no clocks, internet, TV, phone, or contact with the outside world. Priorities become crystal clear.

The night was long—and muggy. We finally opened the windows after a couple of days, but the air was still and stifling. I shed my usual long pajamas in favor of shorts, but it didn’t help. We were one of more than 6.2 million with power. Read more on The Guardian.

The blackness was complete. No nightlights, no streetlights, oven light, or phone light. Only the distant humming of generators was heard, as a constant reminder of what our entire neighborhood was experiencing.

Outside air was stagnant with humidity, and heavy with oppression and misery. Even though I couldn’t see the people close by, everyone, I knew, was hot, worried, sleepless, miserable.

My mind would not rest. I tossed and turned—thinking. Spinning my wheels about whether all our freezer food would spoil, and the cost to replace it. Where could we go in the morning to find a cup of coffee, or go to the bathroom? How long would our water hold out to add into the toilet for that one precious flush? What we would eat?

Even prayer was not allowing me to rest. I was but one of millions in our beloved state now in survival mode. God gave us those instincts for self-preservation. No longer just living—we were surviving. Minute by minute, hour by hour, day by day.

Seen in the store on faces of people searching for food that doesn’t need refrigeration, in mussed hair, worried faces, eyes lined with circles after no sleep.

Seen in the miles-long lines to the gas pumps with Sheriff Deputies keeping the temper—and the peace in check. Shell-shocked people, fearful of the future. Only wanting a cool place to escape the heat, splash cool water on their faces, or use a toilet that flushes with no fuss.

These are faces I look into for three days; we are doing the same. I thought of war victims who endure life-threatening bombings and guns and other terrors on a daily basis. How a person would become numb, just surviving, not thriving. How blessed we are to know that this is temporary. Help is on the way. Electricity will flicker on soon, food will be readily available, gas lines will trickle down to nothing, and life will go on as before.

This morning is the first day since Monday we didn’t wake up and think survival. I had a new appreciation for people who have to contend with survival on a daily basis. Our frustration and irritation was short-lived. We knew relief was on the way.

How do you keep hope alive when you don’t see an end in sight? Day after day, week after week, year after year the misery continues on—unlike the tiny three days we experienced?

Hope in God. Hope in heaven. This is my hope. There is our assurance.

Life is back to semi-normal and we only lost a couple of refrigerator items. Some weren’t so fortunate. Read how many people were affected by Irma at Phys.Org.

Although we fared pretty well, we want to remember all those who lost their livelihoods—and even their lives. Read their stories here. And never forget.

How do you cope when life gets out of control? Please feel free to comment.

Penelope Silvers is founder of PhilosBooks.com,
where Independent Authors are introduced to the World!
She is a freelance writer, publisher, and radio host of
Penelope’s Book Chat on Blog Talk Radio.